Although her job as a library specialist is great, working at Arapahoe Library District’s Koelbel Library, located in Centennial and near Greenwood Village, is “a bit of a doozy as a …

We’ve all had the desire to do more and to have better representation within the district, so that was my motivation.”
Shirmeca Littlejohn

I would say that our existence has shifted other internal discussions around inclusivity in general. Folks from other departments will reach out to us sometimes and ask for advice”
Sydney Hawkins
Tayler Shaw
tshaw@coloradocommunitymedia.com

Although her job as a library specialist is great, working at Arapahoe Library District’s Koelbel Library, located in Centennial and near Greenwood Village, is “a bit of a doozy as a visibly Black employee,” said Sydney Hawkins.

At Arapahoe Libraries, nine out of 343 employees identify as Black — less than 2.7% — said Michelle Cingrani, a media relations specialist with the district, via email.

“One of our managers had wanted some sort of employee resource group specifically for Black employees to exist. She had been pushing for it and there wasn’t any action happening until George Floyd’s murder,” said Hawkins, a facilitator for the group.

Following the murder of Floyd in May 2020, Hawkins said she thinks there was advisement from an outside consultant to let all of the Black employees at the Arapahoe Library District have a space to talk to each other.

That first meeting happened in June 2020, and during the meeting, people expressed wanting to make the gathering a regular occurrence, she said.

“For a lot of us, it was the first time we met each other, because we were all so separated at different branches,” Hawkins said.

Shirmeca Littlejohn, a library specialist at Smoky Hill Library and one of the founding members of the group, said she wanted to get involved “for my own sanity, at first.” It gave her a space to share some of her frustrations with people who could understand given they’d had similar experiences.

“We’ve all had the desire to do more and to have better representation within the district, so that was my motivation,” said Littlejohn, who is the group’s treasurer.

The group did a follow-up meeting around September 2020, Hawkins said, and by January 2021, they had a mission statement they presented to the board of directors that was approved.

The mission of the group is pretty fluid, but it mainly is to center Black voices across the African diaspora, Hawkins said. Currently, there are about six members.

She said some of her goals for the group are “to make sure that the rest of (the) district knows we exist, as well as patrons, and provide … programs that highlight Black people, which had been something that was lacking in the past.”

The group meets weekly, Littlejohn said — not only to connect with one another, but to do important work for the district.

As the first employee resource group in the district, some challenges of the organization were establishing its value and role, Littlejohn explained.

“It’s difficult to change your mindset, or to change tradition, or to change immediate policy … because it’s never been done before within ALD (Arapahoe Library District),” Littlejohn said. “So that’s one of our challenges is to (say), like, ‘No, this is valuable. No, this is necessary. And we should really look into adapting for this.’”

“There’s a lot of good intentions at the district, and not a lot of action. But the African Diaspora Advisory Collective certainly would love to see more inclusive hiring, better and more intentional retention practice,” Hawkins said.

One of the group’s suggestions was for the district to implement more targeted hiring practices, such as printing and sharing job postings in community centers, mosques and synagogues, rather than just online. Unfortunately, due to some legality concerns, the idea was not executed, Hawkins said.

Another suggestion was having more transparent collection development for the libraries, Hawkins said.

Developing more diverse collections is important because, currently, it’s something that is lacking, Littlejohn said.

“As far as representing all diverse cultures, there’s predominant cultures that they have represented. But so, we’re pushing to get a little more diversity in everyday items, not just things that get rotated on a holiday basis type thing,” Littlejohn said.

When asked about what have been some of the successes of the group and the changes it's been able to implement, Littlejohn said, “That we exist, is one.”

Hawkins agreed, saying, “That was honestly a pretty significant accomplishment.”

The employees are located across about five different libraries, so getting a guaranteed block of time to meet to do work was a challenge at first, Littlejohn said. However, those meetings have now been established as a priority.

“I would say that our existence has shifted other internal discussions around inclusivity in general. Folks from other departments will reach out to us sometimes and ask for advice,” Hawkins said.

For example, some asked for advice about potentially partnering with the Tattered Cover Book Store, given its previous controversy.

The store, as reported by The Denver Post, faced backlash after releasing a neutrality statement during the Black Lives Matter protests following Floyd’s murder, as well as after its owners claimed it was the nation’s largest Black-owned book store.

“And so we were able to provide our thoughts,” she said, noting such a conversation would have been unlikely prior to the group’s existence.

Littlejohn said the district is also starting to consult the group about their wording and marketing to make sure it’s appropriate. The collaboration has been great, she said, because it’s helped prevent some offensive material from being shared.

“The longer we exist, I think the more we’re getting used as a resource,” Littlejohn said.

In addition to its advocacy and consulting work, the African Diaspora Advisory Collective occasionally offers supplemental programs for the public.

Littlejohn said the group wanted to create programs they saw value in and thought patrons would find value in as well.

“We wanted to just get in some programming that we knew the Black community, Black-identifying community, would love to have,” she said. 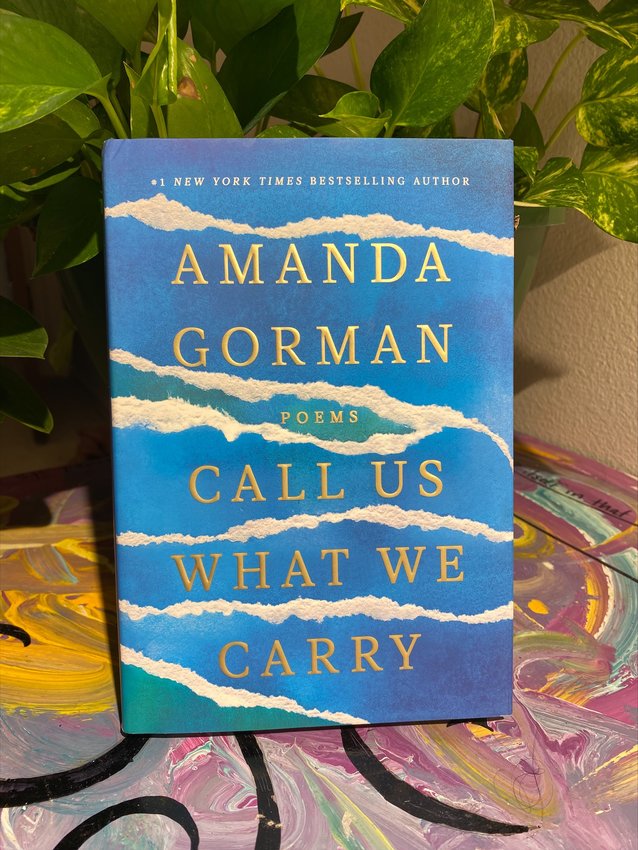 Sydney Hawkins' copy of the book, "Call Us What We Carry."

The group’s most recent event, held in August, was a virtual conversation about the poetry book “Call Us What We Carry,” written by 24-year-old Amanda Gorman, a poet and activist who spoke during President Joe Biden’s inauguration.

People gathered via Zoom for the conversation, which Littlejohn facilitated, discussing what stood out to them from the poems and how they see it relating to society.

Some of the themes discussed during the August event included the power of words, the value of storytelling and the importance of addressing generational trauma. Participants shared and compared their interpretations of the poems, always in a respectful manner.

“To have all of those different ideas and different views come apart in a conversation was amazing,” Littlejohn said, explaining she hopes to foster a community of people who want to understand others’ perspectives.

Attendees also spoke about the importance of taking action to help alleviate some of the pressure placed on younger generations to address current issues, such as climate change and social injustice.

Although one person cannot solve these issues on their own, Hawkins said a person’s actions can ripple out and enact change on some level.

The African Diaspora Advisory Collective is an example of that, she explained, as it has directly benefited its members and enacted small but important changes in the library district.

When the time comes that the founding members of the African Diaspora Advisory Collective no longer work at the library district, Hawkins said she hopes the employee resource group continues to exist.

“I really hope that our district means it when they say that, you know, we are codified in the backbone — or, I don’t know, maybe the muscles, maybe not the backbone — of what our library district is,” Hawkins said.

Participation in the group has helped with Hawkins’ professional development, she said. For example, it helped introduce her to other people in the district she may not have otherwise met and gave her opportunities to join other committees and speak to upper-management.

“It’s been necessary and it’s helped us all develop professionally … and keep us at ALD (Arapahoe Library District),” Littlejohn said.

Hawkins said the group “keeps us mentally sustained, at such a homogenous work environment.”

“I’ve gained a sisterhood from it,” Littlejohn said, explaining the group members regularly check in on each other outside of their meetings. “It’s been super, super valuable.”

Looking ahead, Hawkins said it’s important that more employee resource groups are created for people of other identities, as well.

“I think (it) would help with retention because, you know, we're not the only ones underrepresented at libraries,” Hawkins said.

Overall, progress has been made at Arapahoe Library District, Littlejohn said, but there is still more work to be done.