"Traditional neighborhood developments" to be implemented

Centennial City Council approved changes that will require more housing types to be developed in parts of Dove Valley during its Aug. 1 meeting.

The decision came following a presentation by …

"Traditional neighborhood developments" to be implemented

Centennial City Council approved changes that will require more housing types to be developed in parts of Dove Valley during its Aug. 1 meeting.

The decision came following a presentation by David King, Centennial’s development services specialist, on behalf of the city’s staff, recommending the city amend its land development code to adopt a new residential overlay district as a way to increase housing diversity in Centennial.

According to the staff report for the ordinance, about 78% of the housing stock in Centennial is single-family housing. The city is currently undergoing a housing study to identify housing issues in Centennial, King said.

“The study is ongoing, but a clear consensus has formed from the community and from council that there is a need for more housing options and diversity within the city to serve current and future residents,” he said.

An overlay district is essentially an area that has special zoning standards. Under the Dove Valley overlay district adopted by council, any future property developments within the district that are zoned as “urban residential” must implement a “traditional neighborhood development.”

“Urban residential” is the city’s densest residential zoning district, permitting up to 20 dwelling units per acre, King said. This zoning type permits traditional neighborhood developments, which is defined as a development that has more than one housing type and a variety of residential lot sizes, he said.

According to the land development code, some of the housing types that are permitted in a traditional neighborhood development include single-family homes, duplex townhouses, cottages and multifamily and multiplex buildings.

For future developments of multifamily buildings in a traditional neighborhood development, council also approved a new modification that increases the permitted building height from 45 feet to 50 feet.

“This change is in line with other multifamily height allowances in other zone districts in the city,” King said.

There is no area within the city where a traditional neighborhood development currently exists, according to the staff report. 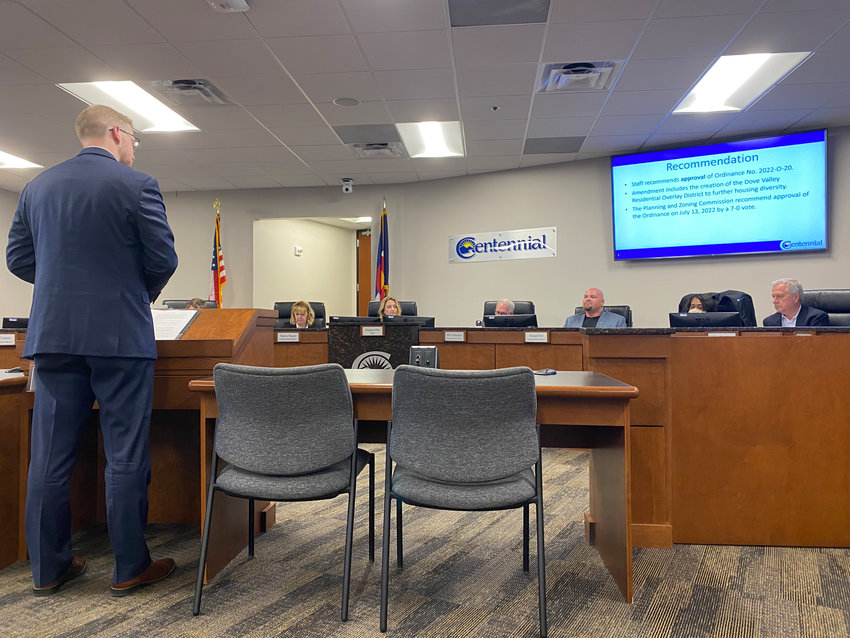 Don Sheehan votes against the measure

The council voted 8-1 in favor of the changes, with Councilmember Don Sheehan being the only vote against it.

Sheehan said because the city has not seen a traditional neighborhood development be implemented, it is unknown what the impact of the requirement may be. He also pointed out that the housing study is not yet complete.

“I would agree that what we need to do is build, and build, and build as much as we can in terms of housing units. We have a lot of demand. We don’t have a lot of supply,” Sheehan said. “I don’t like the requirement that forces a developer to do things in a particular way that may not be a marketable product for them.”

Sheehan said if the city provides barriers for developers, the developers may go to another city that doesn’t have those requirements.

“There wasn’t a view that it would hamstring him in that process. I think that it’s a way that the city [is] securing our goals for diversity in housing for a multitude of options of housing, and while also still allowing that developer the flexibility to select those housing types,” King said.

Also during its Aug. 1 meeting, council approved zoning a portion of land located within the Dove Valley overlay district as “urban residential,” making the area now subject to the new housing diversity requirements.

The “urban residential” zoning was one of three zoning designations made for an approximately 111-acre property located north of East Broncos Parkway and west of South Jordan Road.

The property was part of the approximately 274 acres that was annexed to the City of Centennial as part of the “Dove Valley Regional Park/Cherry Creek Innovation Campus,” according to an April 18 staff report. This annexation was initiated by Arapahoe County, Cherry Creek School District and the South East Metro Stormwater Authority.

At the time of the annexation, the zoning for the approximate 111 acres in Dove Valley was not yet determined. The initial zoning designations for the property had to be placed within 90 days after the effective date of annexation, which was May 23, King said.

During the Aug. 1 meeting, the property, which was previously zoned as “mixed use” under Arapahoe County, was split among three different zoning districts: urban residential, public open space and recreation, and business park 50.

According to the staff report, the urban residential lot was about 79 acres, the open space was about eight acres and the business park was about 24 acres.

The council voted 9-0 in favor of the proposed initial zoning of the area.

“As this property is included in the ‘Dove Valley Residential Overlay District’, the portion of the property zoned RU will be required to implement a traditional neighborhood development,” King said.

Local news
Englewood homicide suspect was neighbor of victim, heavily armed, affidavit says
The man accused of shooting and killing a woman in southwest Englewood Wednesday night was her neighbor and was heavily armed at the time of his apprehension minutes later, according to an arrest affidavit.
South Suburban unveils plans for Jackass Hill Park
The plans come after months of outreach from the parks service, which included an in-person community meeting in June and an online survey that ran for most of May.

Police investigating murder in southwest Englewood
A woman was found dead Wednesday night from a gunshot wound "at a nearby residence," police said.