After 34 years of service, Glenn Thompson, Chief of the Public Safety Bureau for Arapahoe County Sheriff’s Office, is retiring.

Centennial City Council took a moment during its Jan. 10 …

After 34 years of service, Glenn Thompson, Chief of the Public Safety Bureau for Arapahoe County Sheriff’s Office, is retiring.

Centennial City Council took a moment during its Jan. 10 city council meeting to pay tribute to Thompson, who had been the city’s liaison for the sheriff’s office since 2014.

“I, personally, have had the opportunity to work with Chief Thompson for a long time,” Mayor Stephanie Piko said. “It has always been a privilege to work with you, sir, and I appreciate everything that you have done.”

Piko presented to Thompson a framed picture that said “Gone Fishing” with signed thank-you notes from council members, as well as a wrapped fishing pole.

“Thank you all so much,” Thompson said. “You all have been a pleasure to work with.” 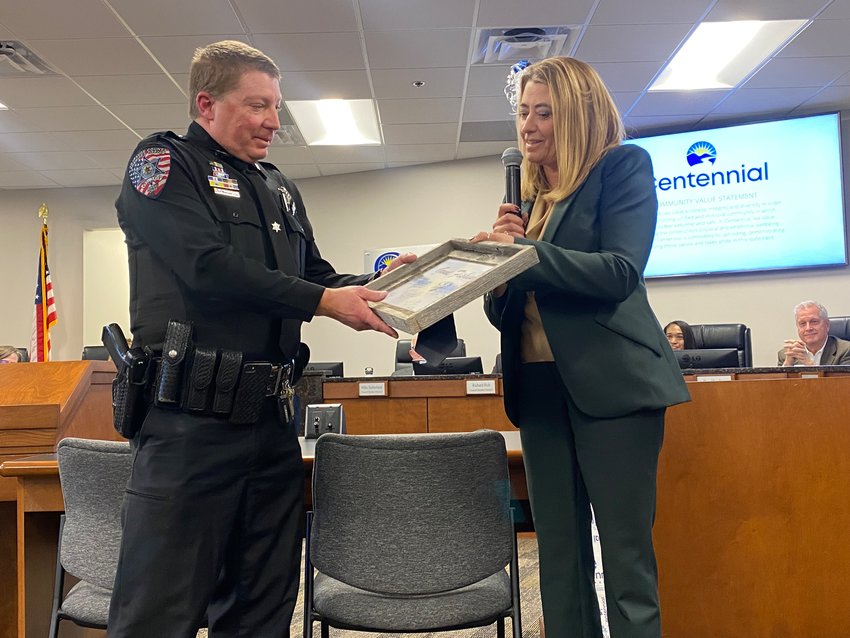 Thompson’s law enforcement journey dates back to 1982, when he was 14 years old, according to the sheriff’s office January newsletter.

A freshman at Douglas County High School at the time, he joined the Explorer program at the Arapahoe County Sheriff's Office, which is an educational program for young people who want to learn more about a career in law enforcement.

Thompson realized he wanted to become a police officer after going on ride-alongs with his sister, who was a police officer with the University of Colorado Boulder Police Department, according to the newsletter.

He graduated from the police academy in 1990 and began rising through the ranks, eventually becoming a lieutenant in 2007. By 2012, he was appointed captain.

In 2014, David Walcher, the Arapahoe County Sheriff at the time, appointed Thompson to Bureau Chief of the Public Safety Bureau, putting Thompson in charge of more than 300 employees.

Thompson was also responsible for managing the contract for law enforcement services for the City of Centennial — a contract worth $33 million, according to the newsletter.

Piko described Thompson as reliable, forthcoming and committed to the partnership between the city and the sheriff’s office.

During his career, Thompson also helped develop the co-responder program, implement a new Special Response Team to assist in getting firearms and drugs off the streets, expand the School Resource Officer Unit, and launch the Unified Metropolitan Forensic Crime Laboratory, per the newsletter.

“Your dedication — not only to the City of Centennial, but to the entire community — is apparent in every action that you take,” Piko said. “You support us, you support the citizens. And so, we would like to take this opportunity to congratulate you.”

State of education report finds teachers in need of more support
Survey results conducted by the largest educator’s union in Colorado paint a bleak picture of how most educators feel in their jobs. The Colorado Education Association recently surveyed around …

How to defer payment on rising property tax bill
Many Coloradans’ property tax bills are spiking because of rising home values across the state, but there is a way to put off a big hit to your wallet happening all at once. The legislature passed …

Amazon put workers at risk at Aurora warehouse
Amazon faces new fines for workplace violations at its Aurora facility and several other warehouses nationwide, according to citations issued Wednesday by the Occupational Safety and Health …

Study eyes weed legalization
Last year, a study came out showing that marijuana legalization in Colorado likely increased cannabis use among adults in the state. Because of the novel methods the researchers used to examine the …