Police for the City of Englewood are reporting that crime was higher in 2021 than 2020, with the number of some crimes being committed at a six-year high.

Police for the City of Englewood are reporting that crime was higher in 2021 than 2020, with the number of some crimes being committed at a six-year high.

The data falls largely in line with statewide trends that showed crime was up in 2021 compared with years prior, though the reasons remain varied.

The data was presented during an Englewood City Council meeting March 28 during which police department heads asked council for additional funding to hire more staff that they said was desperately needed.

"Getting fully staffed is a primary goal," said Englewood Police Chief Sam Watson. "We can show that adding more police officers ... adds to visibility, it adds to safety, it adds to rapid response, it adds to crime reduction, and those are all that we're trying to accomplish.”

Overall, the number of crimes committed within the city in 2021 was 4,499, up from 3,743 in 2020, according to the department. Of that, police separated the crimes into three main categories.

Property crimes, which make up the vast majority of crimes and include arson, burglary, property damage and thefts, totaled 3,618, up from 3,033.

Crimes against a person, which include murder, kidnapping, sex crimes, intimidation and assault, were at 684, up from 480 in 2020.

And crimes against society, which include drug offenses, weapon offenses, prostitution and animal cruelty, were at 197 in 2021, down from 263 in 2020. 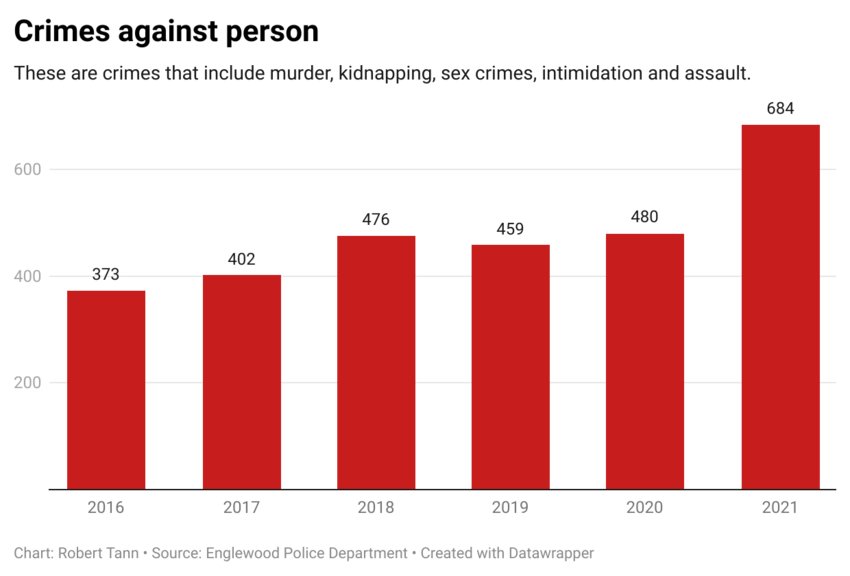 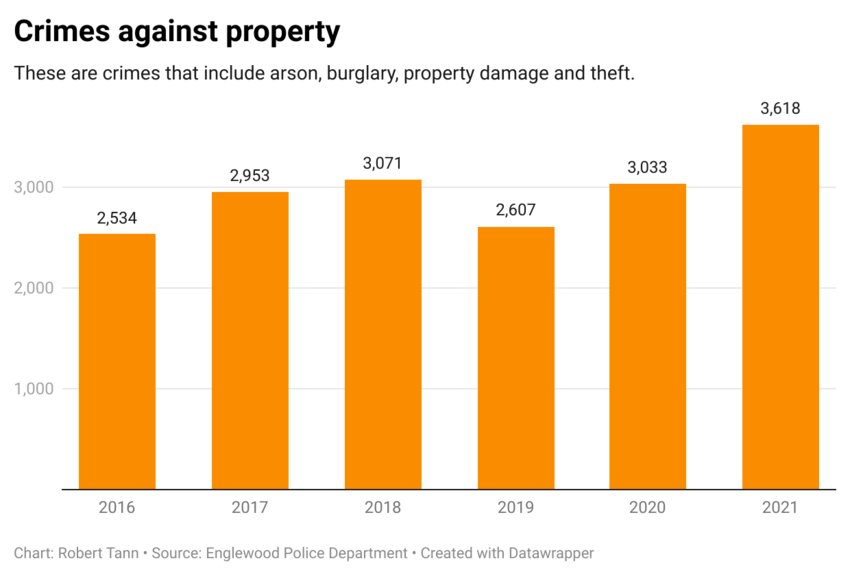 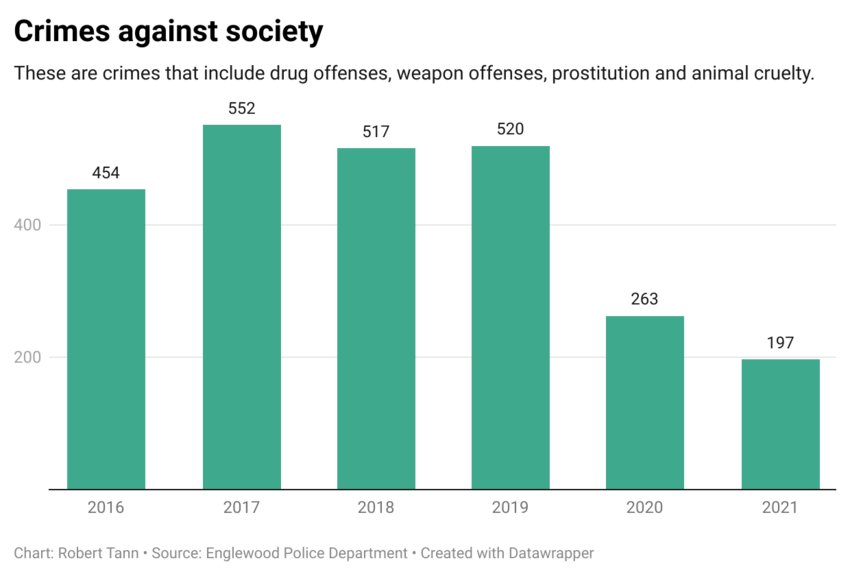 Property crimes and crimes against people were at a six-year high, according to the department's data, and were greatly higher than some other neighboring municipalities, including Highlands Ranch and Littleton.

Data also shows that 47% of arrests were Englewood residents while 32% were non-residents and 21% were unknown, which includes people who are homeless or who have unrecognizable addresses.

Safety is a major concern among Englewood residents according to a 2020 survey.

Of 236 people surveyed, just over half, 56%, said they had an overall feeling of safety in the city. Of 232 people surveyed, 86% said safety was essential or very important for the city to focus on in the next two years.

Though overall crime was up in the city, Englewood police reported fewer calls for service last year, receiving 55,368 while in 2020 the department received 58,944. 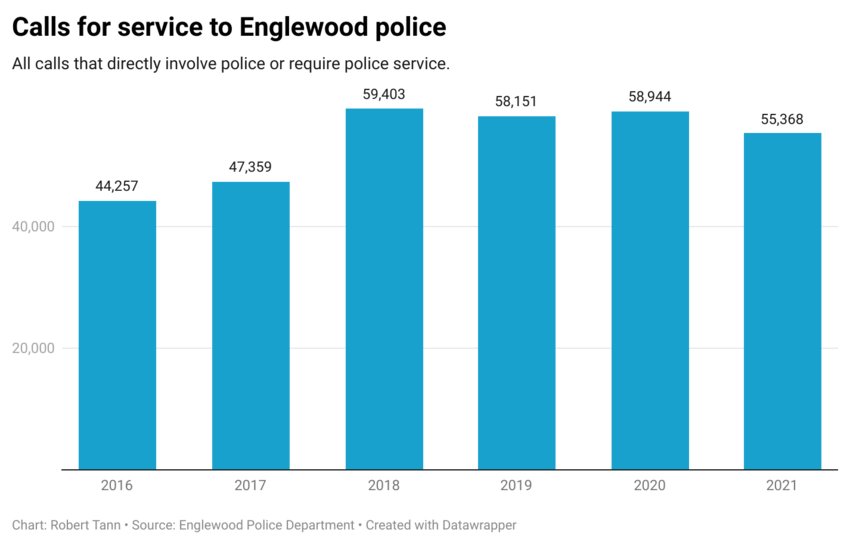 Police department heads asked for more funding from council and requested an additional $1.2 million in this year's budget.

Those budget numbers also include the fire marshal office, code enforcement, emergency management and the city's contract with Denver Fire.

The additional $1.2 million requested would go towards hiring six new police officers as well as two new desk officers and a new dispatch supervisor. Council has not approved the money and may vote on the measure at a later, unkown date.

Police department heads said their force is currently understaffed, needing 78 active officers to be considered at-full staffing. Currently, four officers are in training and one is enrolled in a police academy, accoridng to investigator Scot Allen.

Watson said the result is a department that's stretched thin.

"Because we're short, the demands that we have for police officers, the safety ingredient, it's really difficult," Watson said. "People are getting overtime shoved on them ... if an officer wants to take the night off to have dinner with his wife, they can't because it would take us below minimum staffing."

There are many compounding factors for why crimes are on the rise, according to Stacey Hervey, associate professor of criminal justice and criminology for Metropolitan State University.

The COVID-19 pandemic had led to increased isolation, exacerbated mental health issues and caused spikes in drug and alcohol use, all of which can be a reason for committing crime.

And police departments, for various reasons, are "not being as proactive as they have in the past," said Hervey, who also worked for the Boulder Police Department as a victim advocate for two years.

Since 2020, when civil rights protests over the murder of George Floyd sparked calls for police reform, some departments have shrunk, even as their budgets have gotten bigger.

“We are seeing a reduction in the people who want to go into this profession, especially people of color, which is really needed to change policing," Hervey said. “It’s made police hesitant to be proactive in policing … and it led to the retirement in a large population of police officers.”

Englewood police blamed recent state laws that have reduced certain drug offenses from felonies to misdemeanors, as well as raised the threshold for charging property crimes as felonies, for reasons why crime has increased.

"It's frustrating for the community when we show up and all we can do is basically write a summons and kick them down the road," said Englewood Police Division Chief Tracy Young.

Hervey said the softening of some charges has emboldened more crime. But having more police presence, and more money, won't necessarily translate to a reduction in crime, she said.

“Having more boots on the ground is never going to just reduce crime because crime is so multifaceted,” she said.

Looking to alternate forms of policing

Officers need to adapt to new ways to better address the growing mental health and drug crises that are sweeping Colorado, Hervey said.

“We’re seeing a huge increase in the needs for mental health, but it’s just very hard to find good mental health in this country," Hervey said.

This will come from spending money wisely, as opposed to just spending more of it.

Englewood police, during the March 28 council meeting, said that while they want to bolster their presence on the street they will continue to focus on alternate forms of policing, such as continuing their co-responder program which sees licensed clinicians join officers when responding to mental health-related incidents.

"These professional mental health workers have been huge in our success," Young said. "Without them, it would require one, potentially two officers taken off of the street to deal with the mental health issues."

Police are also hoping to launch a new program next month in partnership with Rocky Mountain Crisis Partners to divert certain mental health calls that are non-violent to social workers.

And by July 1, police hope to launch a mobile response unit to help take people to mental health care facilities and treatment centers. That program will be fully sponsored and funded by AllHealth Network, a nonprofit mental health service located in Littleton.

Hervey said she is supportive of these methods and urged departments to find more ways to partner with social workers and schools as a way to prevent crime.

“How do we make the police do their jobs better and deal with the changing populations and problems that are occurring in society?” Hervey said. “We have a lot of resources in our communities, sometimes we do not use them effectively.”

A new era for policing

In the fallout of the George Floyd protests in 2020, Colorado lawmakers passed sweeping police reform laws meant to increase accountability.

Watson said the laws, which mandate body cameras and removed qualified immunity, which typically shields officers from being sued, have burdened his department with excessive paperwork and led to a "chilling effect" on officers' motivations to react to certain calls.

Hervey said some of these laws have created new challenges for police departments, but that it's not always a bad thing.

“The reality is some of those violent events did change policing, sometimes for the better,” she said.

To show that officers are working on changing police culture, Hervey said departments must understand the “historical trauma” policing has had on people of color and realize instances of implicit bias.

Some of the new accountability measures issued by the state are the right approach, Hervey said, such as body cameras.

“Some departments have complained about them, but some officers have found them very beneficial for officers showing their side of the story," she said.

But other measures, like the removal of qualified immunity, could also cause more officers to be less proactive when responding to a situation for fear of legal action against them, Hervey said.

"I think we do need to be a little careful, because we are going to get some good officers who leave the field," she said. "I would much prefer a lot more time being spent on screening officers and training officers."

Ultimately, one of the most effective ways to improve policing will be to hire officers that come from, and look like, their community.

“The change has to come from within, and if you’re starting to recruit from people who’ve grown up in those communities, I think it can do a lot of good," Hervey said.

Becoming successful in the workforce

Local news
Englewood homicide suspect was neighbor of victim, heavily armed, affidavit says
The man accused of shooting and killing a woman in southwest Englewood Wednesday night was her neighbor and was heavily armed at the time of his apprehension minutes later, according to an arrest affidavit.
South Suburban unveils plans for Jackass Hill Park
The plans come after months of outreach from the parks service, which included an in-person community meeting in June and an online survey that ran for most of May.

Police investigating murder in southwest Englewood
A woman was found dead Wednesday night from a gunshot wound "at a nearby residence," police said.