Community support needed to avoid limiting those in need

When S.T. became a single mother in March 2022, she found herself in a place of need.

Thanks to a local nonprofit organization called Integrated Family Community Services (IFCS), she was able to find assistance to help her pay one month of rent and feed her 5-year-old son as she worked to get back on her feet.

Community support needed to avoid limiting those in need

Volunteers Jim Kincaid, John Nordin and Ronda Anderson at the IFCS food market.
Tara Magaña
Volunteer Brooke Cowan said she started working with IFCS because it's important to her that people are not hungry.
Tara Magaña
S.T. and her 5-year-old son are grateful for the ways IFCS has helped them.
S.T.
Posted Sunday, December 18, 2022 7:38 pm
Nina Joss
njoss@coloradocommunitymedia.com

When S.T. became a single mother in March 2022, she found herself in a place of need.

Thanks to an Englewood-based nonprofit organization called Integrated Family Community Services (IFCS), she was able to find assistance to help her pay one month of rent and feed her 5-year-old son as she worked to get back on her feet.

But as the country’s economic condition worsens, IFCS is facing potential limitations in the services it provides. With a higher demand than ever, the effects of inflation and the discontinuation of grants that supported their work during the pandemic, IFCS is turning to the community for support.

“We're all about really stepping out in faith, in trust, and hoping that the community kind of backfills or stands in the gap with us,” Director of Development Todd McPherson said.

The organization offers financial assistance, school supplies, holiday grocery boxes and recreation center vouchers for families and individuals in need. But of all its services, IFCS is best known for its food market, which aims to combat food insecurity across the metro area.

“Our focus is fresh food, which a lot of food markets, food banks are not able to provide,” McPherson said. “Dairy, whole grains, produce, protein, protein alternatives depending on people's diets… We're more than just the cans and the boxes of food.”

According to Hunger Free Colorado, about 1 in 3 Coloradans lack reliable access to nutritious foods.

If IFCS is not able to secure enough funding before the new year, it will be required to limit market visits to once a month for families and individuals who use its services, according to a press release from IFCS.

“If we've got to pare back — and our focus is getting people the best food, not just stuff — we will have to limit people,” McPherson said.

According to McPherson, roughly one-third of the program’s patrons visit the market more than once a month. If IFCS has to limit their services, McPherson said they will connect people to other assistance programs when possible.

The organization, which usually has a budget of about $30,000 for food each month, serves over 6,000 people through the food market, according to the organization.

During the pandemic, community needs increased.

“During COVID, we grew over 900% and we opened ourselves up to… the entire metro area – so Denver, Aurora, Jefferson County, all of the areas in which people were willing to drive in to get assistance,” McPherson said. 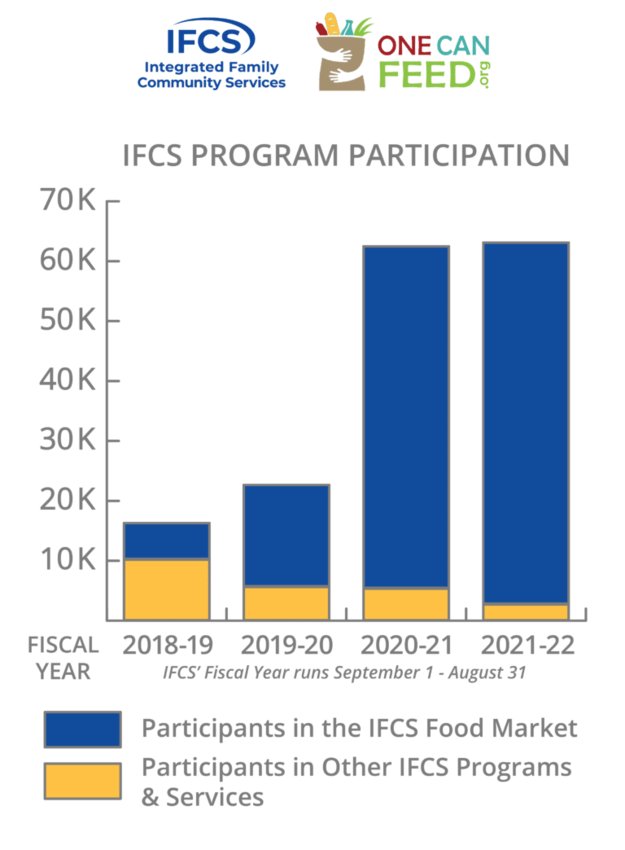 But when governmental funding for pandemic support stopped, the community needs didn’t. As inflation worsens and the economy struggles nationwide, IFCS has seen its highest ever numbers of visitors requesting support, according to the press release.

“Especially this past year, with food costs rising so dramatically, a lot of people are coming in just because they need food,” volunteer Brooke Cowan said. “They can't afford to buy what they need for their family.”

Meanwhile, the nonprofit itself faces low staffing and higher costs of food as economic challenges spread across the nation.

“Now we're bracing up against just continued financial challenges in which the services like ours are really paramount, maybe more important than ever,” McPherson said.

But even at this crossroads, the nonprofit is maintaining its dedication to helping with dignity. For IFCS, alleviating hunger is about more than just providing cheap and easy food to people – instead, it has to do with truly nourishing them.

“There's a certain dignity that comes with getting things that are going to give them a hand up, and not a hand down, things that are gonna catapult them forward,” McPherson said. “When someone knows that they just have inferior food resources, that affects your pride, your energy, your hope.”

For S.T., the quality of the food at IFCS has been important for supporting her son.

“They have healthy, fresh vegetables like cucumbers, zucchinis, tomatoes and apples,” she said. “They had all those healthy things that me and my son like to eat. He is a picky eater, but he likes fruits.”

She said she is grateful to the staff and volunteers at IFCS, as well as those who donate food and money to help people like her and her son. She said nobody ever knows what might change to put them in a situation of needing help.

“My son and I, we are so grateful that they have been able to help us in difficult times,” she said. “I will pay it forward in one way or another someday.”

McPherson said people can best support IFCS by donating a financial gift at https://ifcs.org/donate/ or by texting BETTERTOGETHER to 801801. This money will help IFCS to purchase nutritional, high quality and culturally conscious food ingredients.

People, groups and businesses can also email McPherson at ToddM@IFCS.org with questions about how to best support IFCS.

ifcs, food bank, food bank near me, volunteering, where to donate, food insecurity

A tale of trails: Bike riders, advocates consider options for getting around

Retrievers, their owners are top dog at Goldens in Golden

State of education report finds teachers in need of more support
Survey results conducted by the largest educator’s union in Colorado paint a bleak picture of how most educators feel in their jobs. The Colorado Education Association recently surveyed around …

How to defer payment on rising property tax bill
Many Coloradans’ property tax bills are spiking because of rising home values across the state, but there is a way to put off a big hit to your wallet happening all at once. The legislature passed …

Amazon put workers at risk at Aurora warehouse
Amazon faces new fines for workplace violations at its Aurora facility and several other warehouses nationwide, according to citations issued Wednesday by the Occupational Safety and Health …

Study eyes weed legalization
Last year, a study came out showing that marijuana legalization in Colorado likely increased cannabis use among adults in the state. Because of the novel methods the researchers used to examine the …