“We see climate change as something that we’re experiencing right now today,” said committee member Susie Lanners, 36, during the Aug. 16 city council meeting. “If we wait too long it’s going to be too late. The city needs to take action now to secure the future of all generations of Littleton.”

Lanners is one of 13 members of the Next Generation Advisory Committee — commissioned by city council to give residents aged 16 to 36 a voice in local government — which recently unveiled a two-pronged plan to fight climate change in Littleton.

The proposal calls for city council to form a new citizen committee — which could eventually be expanded to a board — dedicated to environmental stewardship. It also recommends hiring a full-time staff member, who would be paid a recommended salary of $100,000, to oversee and help implement the board’s policy proposals and develop climate-related metrics.

According to documents submitted to council, the proposed board’s duties would include developing a sustainability and climate change action plan; seeking out and enacting techniques to lower Littleton’s carbon footprint and water usage while improving waste disposal and recycling; promoting sustainable practices to Littleton businesses and residents; and oversight of plans and codes related to sustainability efforts.

Similar boards exist in other south metro cities including Englewood and Lone Tree as well as Front Range communities such as Boulder, Longmont and Superior. The committee’s call to action in Littleton comes at a pivotal turning point for the nation’s climate response.

‘First time that we’re on the right track’

In an unintentionally well-timed announcement, the plan coincides with Biden’s climate law, which committee members hope will breathe new life into climate action both nationally and in their city.

“At the federal level, the passage of that law gives an undertone that ‘we’re taking this seriously,’” Lanners said in an interview.

Known as the Inflation Reduction Act, the law is the single largest federal investment to fight climate change in U.S. history and will pump nearly $370 billion into moving the country toward a greener economy.

Much of this comes in the form of tax credits and rebates for solar panels, heat pumps, electric vehicles and other greenhouse gas-reducing utilities. The law will also regulate methane emissions, expand loan programs to push power plants towards nuclear and other clean energy, and invest billions into pollution cleanup and reforestation. Taken together, the policies could slash U.S. emissions from 2005 levels by 40% by 2030, several independent studies have found. 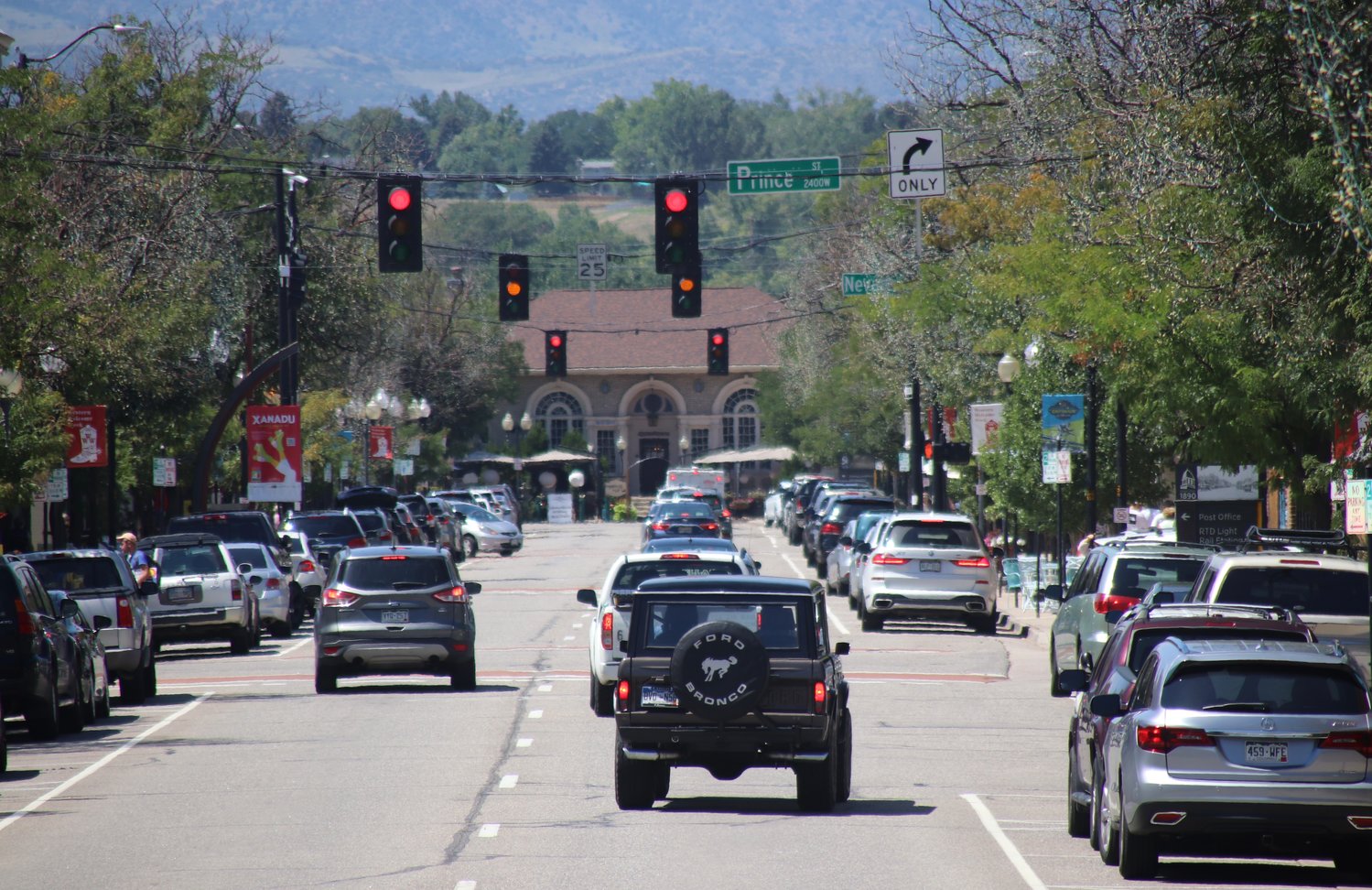 Traffic seen on Main Street in downtown Littleton Aug. 17. With the recently passed Inflation Reduction Act, some car owners could qualify for thousands of dollars in tax credits for electric vehicles. Photo by Robert Tann

Next Generation committee member Sterling Oldemeyer, 36, said the law marks the “first time that we’re on the right track” to combat climate change. For him, it’s been 20 years overdue.

Oldemeyer said he first heard about climate change at the beginning of high school when he followed the 2000 presidential election race between Al Gore and George W. Bush. Gore, a Democrat, was widely seen as pushing climate issues to the forefront of political debate — though climate change had been labeled a national issue since a landmark 1988 Senate hearing.

Gore lost the election, but his message of climate action endured through films like 2006’s "An Inconvenient Truth," which detailed the presidential candidate’s warning of how human-caused emissions were transforming — and threatening — the lives of billions through extreme weather events, the collapse of ecosystems and poisonous pollution.

“I’ve been rather shocked by a lot of the deception and misunderstanding … that people are spouting about climate change,” said Oldemeyer, who added he’s felt frustration with decades of inaction by politicians and corporations.

But with the Inflation Reduction Act, Oldemeyer has renewed optimism.

“To finally see something that is so expansive and clearly targeted towards this issue … we’re finally starting to take responsibility for our emissions,” he said.

This could come in the form of replacing the city’s fleet — which includes police and public works vehicles — with electric cars or installing solar panels on city buildings.

“As Littleton and others invest in those technologies, that infrastructure, those vehicles, the price will go down substantially," Crow said.

Reducing the number of gasoline-powered cars could have a major impact on emissions in Littleton and the state, with a report from Colorado Public Radio finding that greenhouse gas emissions from the transportation sector are Colorado’s largest single source of climate-warming gases.

The Inflation Reduction Act means some homeowners could be eligible for thousands of dollars for such appliances, though the benefits are income-restricted.

‘Long past due to take action’

Lanners said it was a natural jewel in her home state of Minnesota that forced her to take seriously the need for climate protection.

For as long as she can remember, Minnesota’s Boundary Waters — a wilderness area of more than a million acres encompassing a chain of lakes mainly accessible only by canoe — has been threatened by industries looking to conduct exploratory mining.

“I never really knew what I could do about that. It’s always been this scary daunting thing that’s out of the hands of regular people,” Lanners said.

For her, the Boundary Waters — and the fear of losing its protection — has come to embody the greater struggle for environmental stewardship across the nation. Now living in Littleton and in her second year with the Next Generation committee, Lanners is feeling “more drawn to be more responsive” to climate solutions.

Lanners works for Iron Woman, a Colorado-based construction company with an emphasis on environmental remediation. Through that work, she said she’s become more empowered to push for change and sees the Next Generation committee’s climate recommendations as a key step.

“These actions not only put the work into motion, but they also note a level of intention,” she said. “If the city is putting dollars and resources to these things, we hope that it will then inspire other elected officials to take it seriously.”

Under the committee's proposal, a full-time hire overseeing Littleton's climate initiative would develop "relationships with quasi-governmental organizations, surrounding communities, park districts and local business communities to develop collaborative efforts in the fight against climate change and nurture a circular economy." 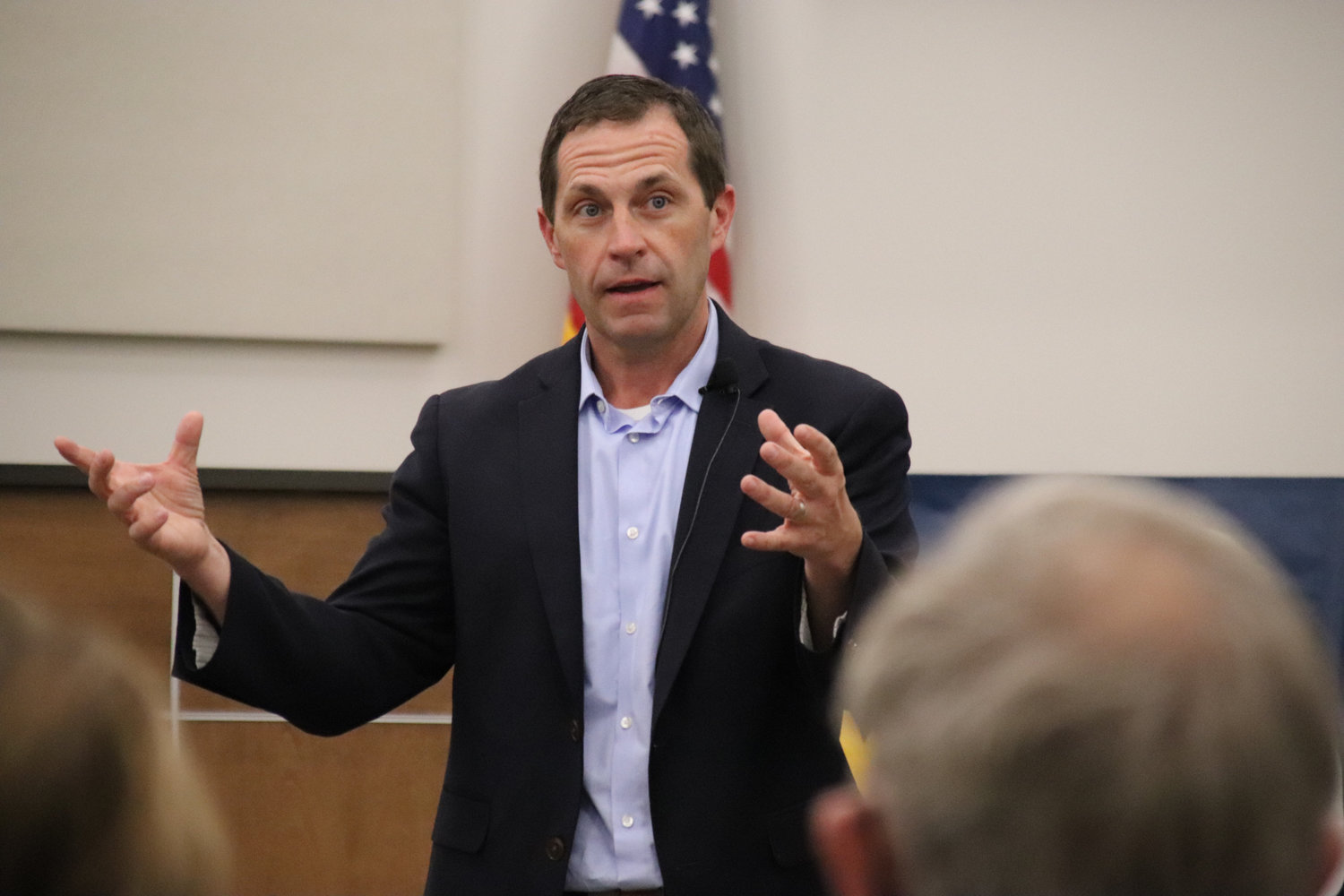 U.S. Rep. Jason Crow, who voted for the Inflation Reduction Act in the House of Representatives, said the law will "catalyze" the transition to renewable energy. Photo by Robert Tann

Regional collaboration will be key to decreasing Littleton’s emissions, Lanners said, and she feels confident that the city’s elected officials understand the needs of the moment.

“We definitely tried to express a level of urgency,” Lanners said. “So my hope is that they start to take action pretty quickly.”

Littleton Mayor Kyle Schlachter signaled his support for the committee’s proposals and indicated the majority of city council will be behind it. In recent years, the city has stepped up its commitment to environmental stewardship, Schlachter said.

One of the clearest examples came in 2019, when Littleton joined with the City of Englewood to unveil an $8 million project to capture emissions at the South Platte Renew wastewater treatment plant.

By injecting gases that would otherwise have been emitted into an Xcel Energy pipeline to produce energy, the plant has been able to reduce its CO2 emissions by nearly 11,000 metric tons in almost two years — the equivalent of removing more than 2,300 cars from the road each year, according to data from the Environmental Protection Agency.

South Platte Renew was the first of its kind in the state to launch such a program, according to Deputy Director of Engineering Jamie Safulko, who said at least three other large-scale emission reduction projects have since been undertaken at other plants.

“Someone has to be the first and kind of set that stage, and we’ve shown it can be really successful and positive," Salulko said.

As Littleton's council prepares for its budget meeting Sept. 9, Schlachter said he will personally push to make the Next Generation committee’s climate recommendations a priority. He envisions a sustainability board could be formed next year, with work beginning in earnest in 2024.

“It’s long past due to take action and try to catch up on past inaction,” Schlachter said. “That’s something that I’m a big supporter of and would love to see."

With local leaders looking to further move the needle on climate change, Crow said "there's still more to be done" outside of the federal law — but added it's a "huge first step."