As an Englewood resident, Jennifer Bartlett drives on Hampden Avenue, also known as U.S. 285, almost every day — a highway she says really needs to be fixed.

As an Englewood resident, Jennifer Bartlett drives on Hampden Avenue, also known as U.S. 285, almost every day — a highway she says really needs to be fixed.

“Not only is it (driving) through, but crossing, and I find that it’s a real barrier. There is more to Englewood on the other side of Hampden, and you just, you don’t even bother crossing it on foot,” Bartlett said.

After discovering there is an ongoing study of a 6.3-mile stretch of Hampden Avenue, she decided to attend the Aug. 30 open house at Englewood High School, which offered the chance to learn about, and offer feedback on, the nearly $1.4 million study.

The 12-month study, named the “Hampden Ave. Mobility & Safety Study,” is examining the corridor from Lowell Boulevard/Knox Court to Interstate 25 with the goal of addressing concerns about safety, congestion and mobility.

Seven entities involved in study, including City of Englewood

Maria D’Andrea, Englewood’s former director of public works, said unlike previous studies of the corridor, this one takes a regional approach and involves seven entities: Colorado Department of Transportation, or CDOT, Regional Transportation District, or RTD, Arapahoe County and the cities of Englewood, Sheridan, Cherry Hills Village and Denver.

D’Andrea initiated the idea of a collective study, she said.

“Originally, when I started with the city, there had been kind of a piecemeal approach to looking at this corridor in terms of how, you know, what improvements could be made,” she said, explaining there have been 23 different studies on this road segment over the years.

People driving along Hampden Avenue, a CDOT road, typically don’t know which city they are driving in, so it’s important to have a regional approach, rather than city-specific approach, to improving the corridor, she said.

“The idea was: How do we get a comprehensive look at what we can do together?” D’Andrea said.

Study has been years in the making

To make the study happen, D’Andrea said the City of Englewood applied for federal funding in 2018 by submitting an application through the Denver Regional Council of Governments’ Transportation Improvement Program. The money was allocated in 2019, and the study began in late 2021.

“We got an 80% match from the federal government, and then 20% from CDOT and the locals,” she said, referring to the cities of Englewood, Sheridan and Cherry Hills Village.

In total, the study costs just under $1.4 million, she said, and Cherry Hills Village, Sheridan and Englewood each contributed about $40,000.

“We’re (Englewood) the project manager. We’re the lead agency, with support from CDOT, and then the other entities are on a project management team,” D’Andrea said, explaining the project team focuses on the logistics of the study and day-to-day tasks.

In addition to a project management team, there is also a community advisory committee.

The study is currently gathering information about the corridor, such as analyzing previous studies and collecting data in terms of traffic, typical biker commutes and public transit routes and usage, D’Andrea said.

So far, there have been three community advisory committee meetings, and representatives of the study have also attended summer events to help get the word out about the project.

“It’s about gathering input, at this point, from the public — like what are the problems, what should we address?” D’Andrea said. 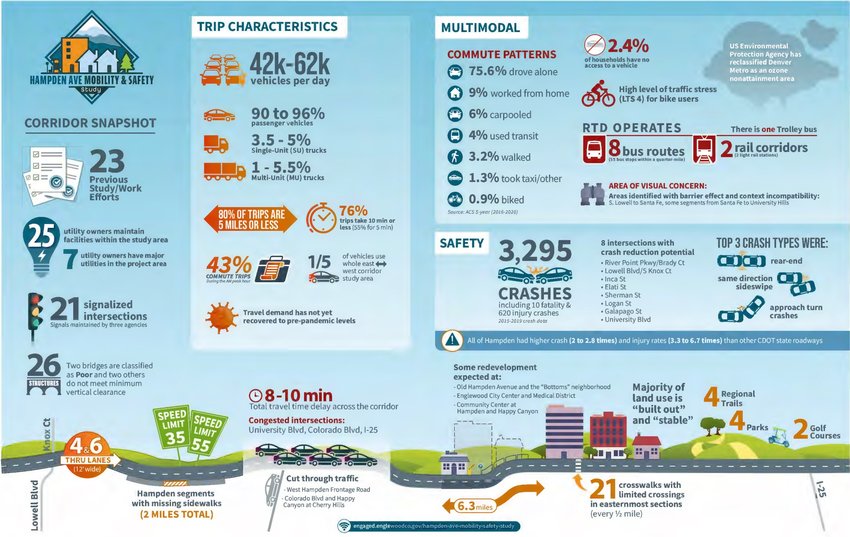 An infographic developed as part of the study of Hampden Avenue.

An estimated 42,000 to 62,000 vehicles drive the corridor per day, and between 2015 and 2019, there were 3,295 crashes, according to the study. The top three crash types were rear-ends, same direction sideswipes and approach turn crashes.

“They want it to be safer,” D’Andrea said about the feedback the study has gotten. “There is a fair number of accidents of different kinds, but it’s pretty well distributed along the entire corridor.”

According to the study, all of Hampden Avenue had higher crash and injury rates than other CDOT state roadways.

Safety is one of the top concerns for Jenn Diffendal, a Cherry Hills Village resident. She said she would like to see crash reduction at University Boulevard and Hampden Avenue intersection, as well as projects focused on multimodal transportation.

“As our community grows, just safer paths and walkways for traffic mitigation and other modes of transportation would be a huge improvement and also good for the environment,” she said.

According to the study, there are 2 miles total of segments of Hampden Avenue with missing sidewalks. Additionally, there is a high level of traffic stress for bike users along the corridor.

Increasing bike accessibility is something Bartlett said she’d like to see, as well as improving the pedestrian experience.

“It cuts Englewood in half, and I’d really like to see them treat it less like a state highway and more like a community feature,” Bartlett said. “I think it’s great that they’re studying it. I know they’re working with CDOT, which is critical, and it’s nice to see the city working with the state.”

“They’re actually doing a nice job capturing the issues in the segments, which I really like,” Bartlett said. “And now, I just hope they are able to incorporate as many of those into their designs.” 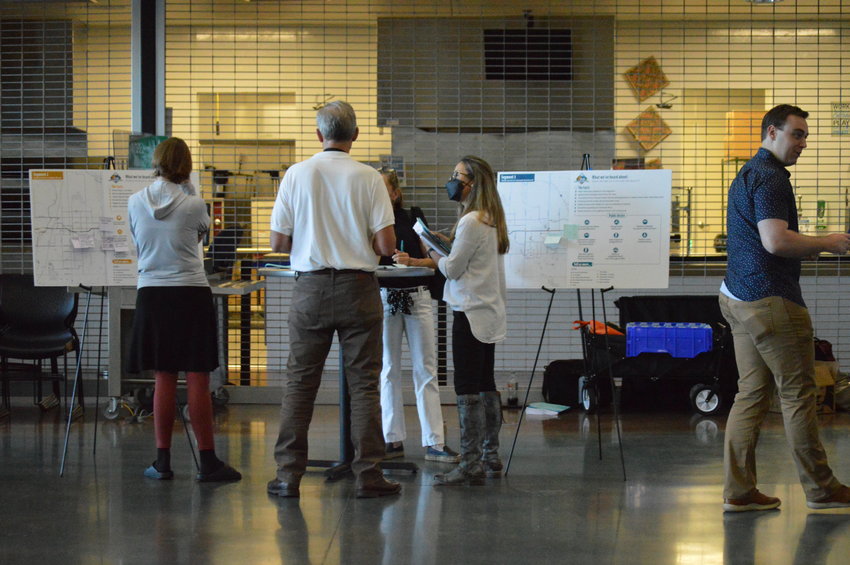 Attendees at the Aug. 30 open house at Englewood High School. 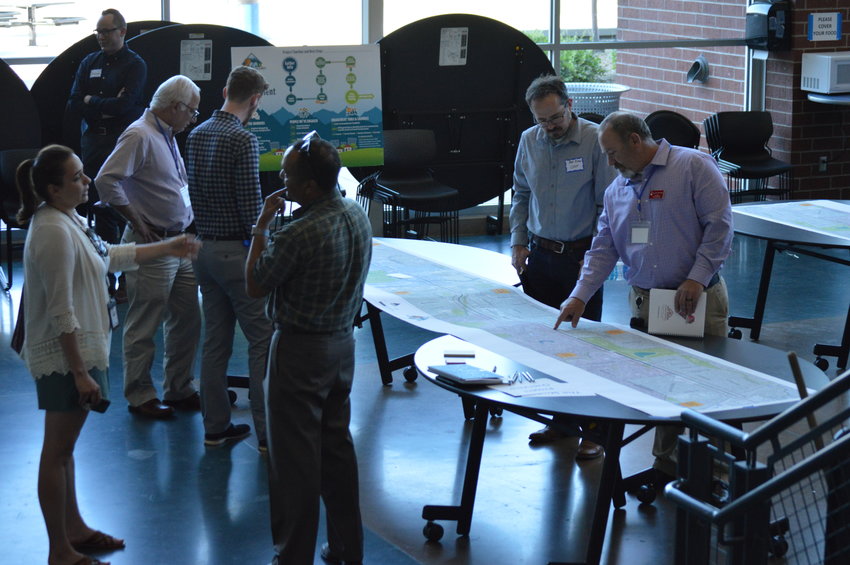 People at the Aug. 30 open house at Englewood High School discuss the 6.3-mile stretch of Hampden Avenue being studied.
Previous Next

The ultimate goal of the study is having a shared vision and identifying short-term and long-term projects that could be anywhere throughout the corridor, D’Andrea said.

Widening the whole road isn’t palatable, especially given the close proximity of other buildings, she said. Instead, the study is looking at improvements that can be made, such as adding a right turn lane, making signals work better, adding sidewalks or adding a new interchange.

When asked if there have been discussions about how to approach funding these potential projects, she said, “That’s where the rubber meets the road, right? How will we go about doing that? And I think that will have to be in partnership with CDOT.”

She explained individual communities could look at applying for project funding through the Transportation Improvement Project process. Another possibility is potentially adding projects to CDOT’s project list, which the department has separate state funding for, she said.

“It’s not going to be inexpensive,” said Randy Weil, a council member for the City of Cherry Hills Village.

Weil is a member of Denver Regional Council of Governments’ Board of Directors and the Arapahoe County Transportation Forum. He said all three organizations, including city council, are really focused on Hampden Avenue and the opportunity for improvement.

“These communities are very different, so it’s a challenge,” Weil said about identifying solutions. “It’d be simplistic to think one size fits all.”

A big area of opportunity is multimodal transportation, he said.

“Part of the problem is single occupancy vehicles, so if you can encourage use of transit or walking, biking, you know, whatever it might be — likely to be a lot cleaner. That’s good, and that saves fuel and improves air pollution,” he said. “I think building the multimodal aspects is like the investment for the future.”

Part of the purpose of the open house was to encourage people to offer feedback about what they feel the priorities of the study should be — something D’Andrea said was important because the corridor is used so often by community members.

According to the study, 80% of trips on the corridor are 5 miles or less and 76% of trips were less than 10 minutes. These findings showed D’Andrea that many use Hampden Avenue to travel short distances within the community, such as to go to the grocery store or pick up children from school.

“I think it’s really important to get that input because people use it so much,” she said. “It’s really part of their daily lives.”

The open house was D’Andrea’s last official event, as she has recently accepted a new position as the director of public works for the City of Wheat Ridge, she said. A staff member in Englewood’s Department of Public Works will transition into the lead role as the project manager.

Those interested in learning more about the study and offering feedback can visit bit.ly/EnglewoodStudy and fill out the comment and question form on the webpage.